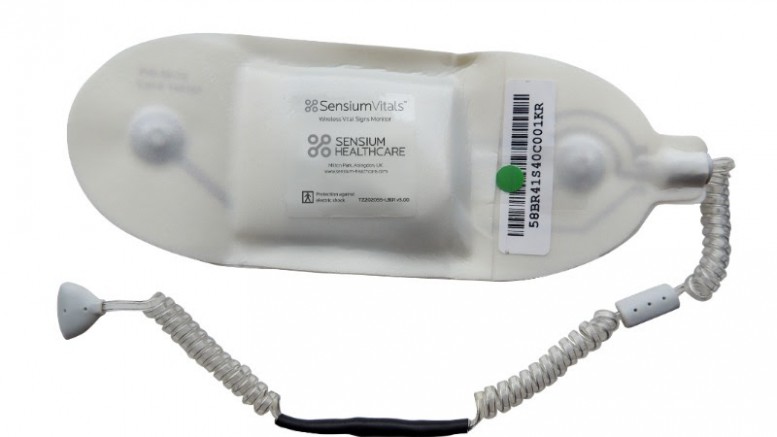 Sepsis, the systemic response to infection, is one of the leading causes of death of in-hospital patients worldwide. It is a potentially fatal condition that is becoming increasingly widespread and alarming, usually recognized by a deterioration in the patient’s vital signs, which are monitored by the nursing staff before treatment is administered. In the U.S., sepsis accounts for far more deaths than the number of deaths from prostate cancer, breast cancer and AIDS combined. The Global Sepsis Alliance defined sepsis as a worldwide medical emergency and possibly the leading cause of death worldwide, which kills tens of millions every year.

Identifying sepsis early is key to survival and presents the greatest challenge in effective treatment and management. Nurses play a vital role in identifying sepsis by monitoring key vital signs of respiratory rate, heart rate, and body temperature. However, in general care areas of the hospital, vital signs are typically taken during routine observation rounds only once every four to eight hours. If a patient deteriorates between these observation rounds, the warning signs can go undetected for hours, leading to potentially serious and costly consequences. Some hospitals are even leaning toward keeping patient nighttime interruptions to a minimum and are recommending avoiding the taking of vital signs after 11 pm to allow for maximum patient rest.

SensiumVitals is a revolutionary new wireless early warning system utilizing radio waves and designed to improve patient outcomes and shorten hospital stays. The system, developed in the UK and introduced to the US market,  enables early intervention by continuously and accurately monitoring vital signs of heart rate, respiration rate and axillary temperature every two minutes and alerting the nursing staff when pre-set thresholds are exceeded.

According to a recent November 2015 ECRI report entitled: Top Ten Health Hazards for 2016, “Failure to effectively monitor postoperative patients for opioid-induced respiratory depression can lead to brain injury or death and was listed as number three on the list of hazards. Intermittent spot checks of oxygenation and ventilation every few hours are inadequate for reliably detecting opioid-induced respiratory depression.”

The system is based on a disposable, single-use, wearable patch that monitors patients outside of high acuity areas.  By notifying clinicians of changes in patients’ vital signs, SensiumVitals brings the nurse to the deteriorating patient, allowing intervention before the condition worsens, potentially resulting in improved patient outcomes, shorter hospital stays, and lower treatment costs. It is currently in trials in two leading National Health Service (NHS) hospitals in the UK at St. James’s University Hospital in Leeds and Queen Elizabeth Hospital in Birmingham.

According to Anthony Sethill, CEO of Sensium Inc., “Patients can be tracked and monitored unobtrusively and continuously in real time when wearing the patch. A preliminary study of SensiumVitals monitored patients reported that hospital stays were shortened with additional cost savings on overall treatment, and serious conditions were reported to the nursing staff hours earlier. In the initial Leeds Study, sepsis was averted as well as a pulmonary embolism by alerting the nursing staff to changes in the patients’ temperature and respiratory rate.”

The SensiumVitals digital patch is an FDA-cleared, lightweight (weighing only ½ ounce), energy-efficient, battery-powered device that uses a proprietary digital radio chip to monitor a patients’ vital signs.  It is designed for in-hospital use, particularly in general care, post-surgical areas, and emergency rooms, and can be easily attached to the patient’s chest by means of two self-adhesive conventional ECG electrodes. Getting patients up and mobile is often reported as key to faster recovery times and fewer complications. The SensiumVitals patch has unique roaming capabilities that means that patients’ vital signs can be transmitted as they move around.

“Patient deterioration can result in serious health consequences, which may have been averted by an early warning indicator reported by the continuous monitoring of vital signs, such as with the SensiumVitals patch,” concluded Kevin Smith, CCO of Sensium Healthcare based in Boston, MA. Furthermore, the SensiumVitals patch is easily integrated with existing hospital technology via a router-like “bridge” to the hospital IT system that reports to a nurses’ station, central monitoring station or any point-of-care device, including hand-held devices for instant communications.”
For more information regarding SensiumVitals, visit the Sensium Healthcare Website at www.sensiumhealthcare.com.