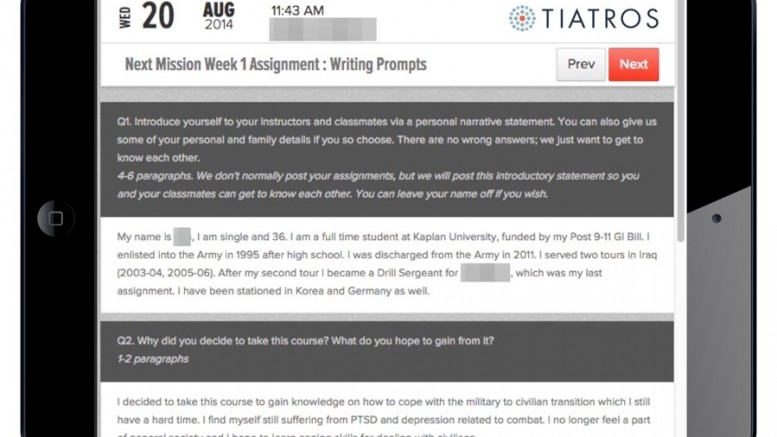 San Francisco-based Tiatros has created a patient-centered, doctor-driven digital solution called a CarePod™ that allows physicians, with patient consent, to create a secure, social network around a patient and safely add people who influence their health to a care plan. Social determinants — which include a patient’s education level, food security, and household stability — are known to be among the greatest influences on a patients’ health outcome, notably patients with chronic conditions.1 Patients typically see a doctor only a few times per year with each appointment an average of 15 minutes per visit — little time to discuss what’s happening in the patient’s life outside of the clinic.2 Exacerbating the time constraints, doctors typically only see a ‘roll up’ report of a patient’s medical history, which lacks insights.3

Tiatros‘ CarePod integrates social media-styled communications, calendaring, and video chat technology connecting individuals to their continuum of caregivers in a HIPAA-compliant environment. In doing so, Tiatros enables people such as family members, specialty physicians, home health nurses, social workers, and behavioral health workers to become part of the care plan alongside primary care physicians. The Tiatros CarePod incorporates IBM’s Watson’s Natural Language Processing API to extract relevant health information from a patients’ unstructured health data (such as posted conversations between the patient and their home care nurse or text responses to digital patient questionnaires) and integrates that data with other available health information to support a holistic view of patient health.

“Understanding the impact of social determinants on a patient’s health requires numerous real-time conversations with lots of different people that doctors simply don’t have time for in today’s health system. Tiatros helps address this, and helps facilitate and record a type of ongoing care conversation,” said Kimberlie Cerrone, CEO of Tiatros.”Tiatros incorporates Watson cognitive computing to more easily unearth care insights from unstructured data. We then integrate it into the broader patient record, which has proven to dramatically increase a physician’s ability to positively influence patient’s health outcomes.”

Tiatros and UCSF to Study PTSD and War Veterans

Tiatros today also announced it is using the Watson Personality Insights API in a study launching this month with theUniversity of California, San Francisco (UCSF).

Almost all soldiers return from a tour of duty suffering from some behavioral disturbance, but not necessarily Post-Traumatic Stress Disorder, which often does not fully present in an individual for six months or more after returning home. There are nearly 3 million veterans of the wars in Iraq and Afghanistan, and as many as 1/3 (1 million) are believed to suffer from PTSD. Only 1/4 of those suffering from PTSD (250,000) ever get even the most minimal of treatment.4

The UCSF study is designed to examine whether Tiatros’ cognitive digital assessment tool for behavioral health can more quickly identify PTSD in veterans returning from Iraq and Afghanistan, and better measure the impact of therapeutic interventions. For the study, the Tiatros tool will organize veterans into secure, social networks and deliver a series of psycho-educational courses called Next Mission. Veterans will watch course materials, provide written responses to questions about their experiences, and collaborate on homework assignments with members of their peer group. These interactions will produce natural language content, which UCSF will use to then ‘score’ the likelihood that a patient will meet the clinical definition of PTSD. Results will be compared against qualitative physician assessments, the current standard of care, which require a six month long post-deployment waiting period before being considered valid.

“Our goal is to lower the barriers of access and stigma that prevent soldiers from receiving care, and aim to create a quantitative marker of the risk of PTSD persisting in an individual — something that has not existed and which is sorely needed if we’re going to stop the ongoing crisis of soldier suicide, which currently claims 22 veterans each day,” said Kim Norman, MD, principal investigator for the study and a professor of psychiatry at UCSF. “Advanced technology such as cognitive computing could be a tremendous asset to clinicians in identifying and caring for this incredibly at-risk population.”

Unique to the motivations for this collaboration is a father-son relationship. Both of Dr. Norman’s sons are veterans of the Global War on Terror. The older, Seth Norman, served as a Platoon Leader throughout two deployments to Iraq, and is now the Vice President of Customer Engagement for Tiatros and a course leader for Next Mission.

Tiatros joins more than 500 companies across 17 industries and disciplines in the Watson Ecosystem, such as Boston-based Best Doctors. In 2015, Best Doctors announced an initiative with IBM Watson for Best Doctors to develop a highly-sophisticated tool that provides real-time, personalized responses to users’ medical questions. The system, named Asklepius, will incorporate a massive database of medical knowledge derived from thousands of medical cases reviewed by Best Doctors. Leveraging Watson, Best Doctors aims to help reduce the physical, emotional, and financial tolls of medical uncertainty and misdiagnosis.

More than 100 members of the Watson ecosystem have introduced commercial cognitive enabled apps, products and services to the marketplace. These members join the more than 80,000 developers globally that are tapping into APIs via the Watson Developer Cloud to pilot, test and deploy new business ideas. IBM has allocated $100 million for venture investments to support this community of start-ups and businesses building cognitive applications powered by Watson. The rate at which companies are introducing cognitive computing and AI-infused apps to market has tripled in less than a year.