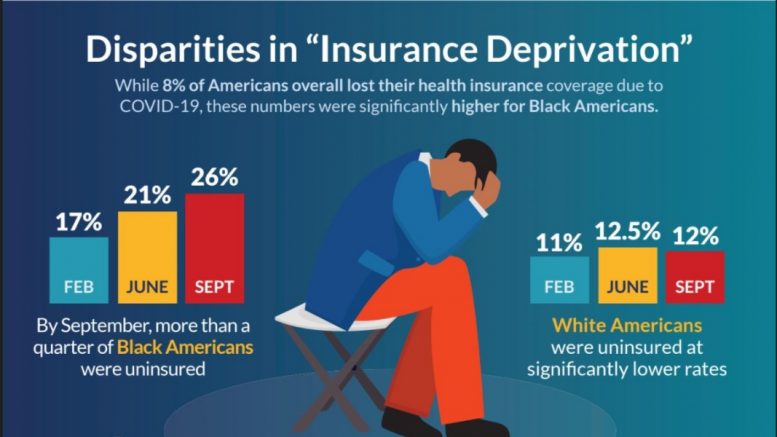 46% of Uninsured Do Not Plan to Purchase Insurance This Year

Live Webinar Today, September 17, at 12pm ET – Free and Open to The Public

A series of national surveys of more than 13,000 people shows COVID-19’s newest emerging threat: unemployment leaving millions of Americans without health coverage. The consolidated survey, “The State of Health Insurance in COVID-19 America,” was conducted by Civis Analytics and released with support from Finn Partners. Fielded across each season of 2020 (in February, June, and September), the survey reveals a stark picture of the future health of the nation and the widening divide between white and Black Americans’ health. As uninsured numbers rapidly climbed 2.7% (from 12% in February to 14.7% in September), approximately 6.7 million more people lost their health insurance. There are now more than an estimated 36 million Americans uninsured.

“We estimate that close to 7 million Americans have lost their health coverage due to COVID-19,” said Crystal Son, MPH, director, Applied Data Science and Healthcare Analytics at Civis Analytics. “Even more alarming, our survey indicates that Americans are not only losing coverage but many report they are not planning to purchase insurance at all for 2021. This will
leave millions vulnerable during a global pandemic.”

Data reveal that Black Americans and young people bear a disproportionate risk of being uninsured. While 8% of Americans overall said they lost their health insurance coverage due to COVID-19, these numbers were significantly higher for Black Americans.

● By September, more than a quarter (26%) of Black Americans were uninsured – rising steadily from 17% in February and 21% in June.

● In comparison, 11% of white Americans were uninsured in February, rising only slightly to 12.5% in June and 12% in September.

“These Civis survey data lay bare the far-reaching impacts of systemic racism in America – and the consequences of an insurance system tied to employment,” said Gil Bashe, managing partner of FINN Partners Global Health Practice. “COVID-19 racial impacts are not confined to medical challenges. The pandemic is also making it more difficult for people of color to continue to work and, as a result of those job losses, to retain the security that health insurance provides
and which enables people to access preventive medical care.”

Key trends highlighted by the Civis survey include indications of consumer confusion, shuffling of priorities and coverage arrangements, and significant burden on Black Americans:

● Confusion around health coverage: The number of people who don’t know whether or not they lost health insurance coverage increased from 2.2% in February to 3.5% in September – representative of an additional 3.2 million people.

● People are changing their purchasing plans: Among the uninsured, 46% said in September that they don’t plan to purchase health insurance this year, up from 33% in February 2020.

● Shifting priorities: An increasing number of people are shopping for dependents’ health insurance this year (12% in February, 17% in September), and 44% report those dependents are children.

● Young people losing coverage at high rates: People under 26 report the highest rate of being uninsured by age group, at 27.4% without insurance.

● Disparities in “Insurance Deprivation:” Nearly 2 in 10 (17%) of Black Americans were uninsured in February; by September, this had jumped to more than one in four (26%). During the same time period, all other racial groups had either bounced back to pre-pandemic uninsured levels or remained within 2% of their pre-pandemic levels.

Key findings from the report are available online here. You can download and share an INFOGRAPHIC of the key findings here.

A panel of leading health experts and advocates will discuss the data during a virtual, live event on Thursday, September 17, from 12:00-1:00pm ET. The event, “A Perfect Storm: The State of Health Insurance in COVID-19 America,” is free and open to the public. Register here.