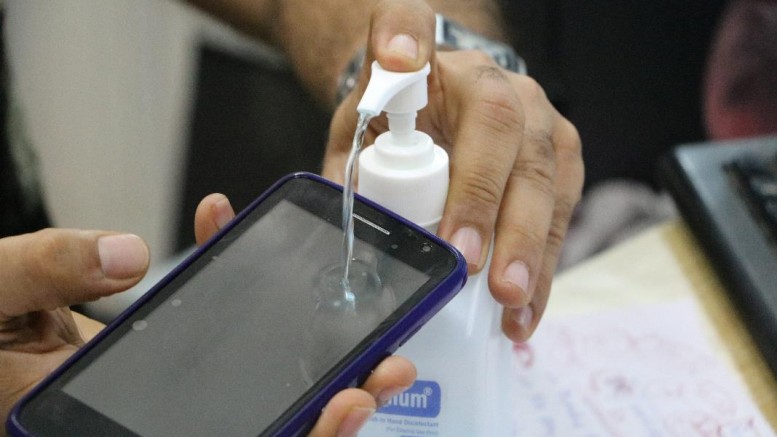 Mobile devices are contaminated by viral RNA due to poor adherence to cleaning protocols, particularly in pediatric settings

In clinical settings, mobile phones benefit patients by placing useful data and information at the fingertips of health professionals during interactions on the ward. But are doctors and nurses unwittingly exposing vulnerable patients to a potential source of infection just by tapping their touch screen?

Previous studies have already shown that the surfaces of mobile phones harbour nosocomial bacteria1. A study by Sylvie Pillet from the Laboratory of Infectious Agents and Hygiene at the University Hospital of Saint-Étienne in France reveals that mobile devices are often also contaminated by viral RNA.

The research team sampled mobile phones and hospital cordless phones used daily by 114 healthcare workers at the University Hospital of Saint-Étienne in Saint-Priest-en-Jarez, France. Swabs were frozen immediately after collection and a one-step reverse transcription and quantitative polymerase chain reaction (PCR) was later used to amplify any viral genetic material captured. Specific assays determined the presence of RNA from potentially epidemic respiratory viruses (influenza A and B, respiratory syncytial virus and human metapneumovirus) and the common enteric viruses rotavirus and norovirus.

Healthcare workers also filled out a detailed questionnaire to enable the team to understand more about when and where each phone was used. Results of the questionnaire and the molecular tests were analysed using blinding to avoid bias. The findings are published in the May issue of the journal Clinical Microbiology and Infection. [http://dx.doi.org/10.1016/j.cmi.2015.12.008, the paper was published online in December 2015]

Viral RNA was present on 38.5% of the devices; the most prominent contamination was from rotavirus RNA (39 of 109 devices) with respiratory syncytial virus RNA present on three phones and human metapneumovirus RNA on only one. No viral RNA from norovirus or either of the two influenza viruses was detected. The report cautions that the sample size was small and not sufficient to demonstrate any correlation between the presence of viral RNA and a quantifiable risk of nosocomial transmission of viral infection.

“The majority of healthcare workers (64%) used their mobile phones during patient care, which was expected. However, it was surprising that 20% of them admitted never carrying out any hand hygiene procedures, either before or after using their phone, even though all said they knew phones could harbor pathogens,” commented co-author Elizabeth Botelho-Nevers. Many healthcare professionals did not carry out any hand hygiene procedures even if using a mobile phone while making physical contact with patients.

The survey also revealed that cordless hospital phones were cleaned and disinfected less frequently in paediatric departments than on adult wards.

“A multivariate analysis demonstrated a significant association between the presence of viral RNA and the mobile phones of healthcare workers in the pediatric department,” adds Botelho-Nevers, who says the findings should “encourage hospitals to step up hand hygiene protocols and to institute better protocols for cleaning and disinfecting both mobile phones and hospital phones.”