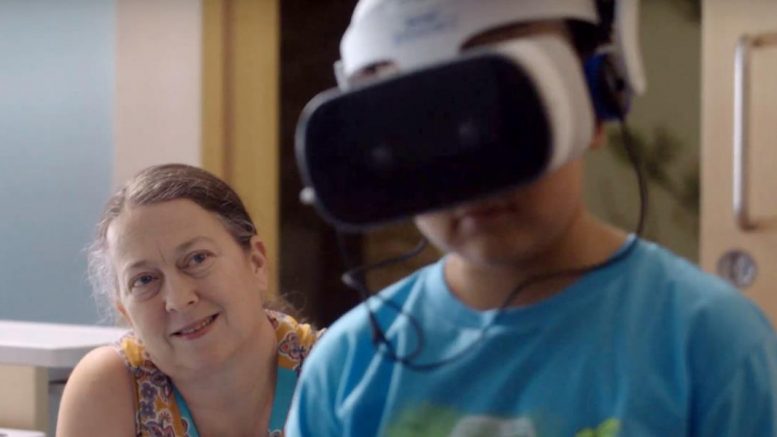 Today, Lenovo previews results from a new global survey that shows people believe in the potential of technologies, such as Virtual Reality (VR), to positively impact our health. In fact, VR is starting to be used in some hospitals in place of general anesthetics to alleviate pain for young patients.

The new Lenovo THIS IS LIFE film, premiering today at the Denver Film Festival, showcases the groundbreaking use of its technology in collaboration with Starlight Children’s Foundation, which is using the Lenovo Mirage™ Solo VR headset in its Starlight Virtual Reality program. The VR technology enables pediatricians at Children’s Hospital Colorado and hundreds of Starlight partner hospitals and healthcare facilities in the US to use the headsets as a procedural tool for critically ill young patients, primarily to reduce anxiety during mild to moderately painful procedures. By using VR as a calming distraction, several patients have been able to undergo these procedures whilst awake, cutting down lengthy recovery times, and reducing the need for medication.

“Due to the distressing nature of treatments such as a lumbar puncture, where a needle is used to withdraw spinal fluid and sometimes administer medication, our patients often receive the procedure under general anesthetic. Virtual Reality can be used in place of general anesthesia to help tolerate pain, and in fact, it is having a profound impact on the quality of life of our hospitalized children,” said Joe Albietz, MD, Medical Director at Child Life, Children’s Hospital Colorado. “We are seeing children who used to require general anesthesia, now able to be fully awake with minimal medications.”

To unearth new insights into the social changes and benefits of intelligent technology and smart devices, Lenovo surveyed more than 15,000 individuals, across the United States, Mexico, Brazil, China, India, Japan, UK, Germany, France and Italy. The research found that people around the world believe new technologies have the power to transform the health care space, with 47 percent of global respondents saying technology will be “critical” in transforming health care in the future.

Furthermore, the majority (84 percent) of respondents say they believe technology can empower people, communities and society to help address and solve big global problems, including in the health care field, while a quarter (25 percent) report they feel technology companies have a responsibility to help address and solve major challenges facing society and the world.

Lenovo aligns its mission – Smarter Technology for All – with this societal responsibility using smarter technologies from VR to Artificial Intelligence (AI) to improve lives.

“As technology transforms the world into a more intelligent and inter-connected place, Starlight Virtual Reality is one of many examples of Lenovo’s commitment to creating smarter technology that transforms society. We believe this responsibility falls to global technology providers to collectively develop solutions to solve larger societal issues, such as in the health care sector,” said Dilip Bhatia, Vice President of User and Customer Experience, Lenovo. “In addition, our new global survey shows that people around the world share our belief that technology can benefit humankind in crucial areas such as health and wellness.”

While the majority of respondents say they feel technology can help play a role in addressing worldwide challenges such as certain health care issues, they say that promise is yet to be fulfilled. More than two thirds of respondents (67 per cent) said that technology and smart devices are currently having a positive impact on their abilities to live healthier lifestyles. Additionally, only half (50 percent) of people globally say they think technology has had a positive impact on society by improving aspects of the health care space.

“We believe happy children heal faster, and the astounding impact of Starlight’s Virtual Reality program at Children’s Hospital Colorado affirms our belief in the transformative power of technology to positively affect a child’s experience in the hospital,” said Adam Garone, CEO, Starlight Children’s Foundation. “We’re extremely grateful to all parties for their generous support in working alongside us to develop this program and in ensuring that we can continue to deliver it at such a large scale to thousands of children at hundreds of hospitals.”

People around the world are aware of the impact that technology has made in users’ general health and wellness, but there is room to grow, especially in terms of personal wellness. This presents an opportunity for Lenovo, as well as other technology companies alike, to innovate and grow in a space where people believe technology can make a positive impact.

Lenovo surveyed 15,226 people in eight languages across 10 global markets, including the US, Mexico, Brazil, China, India, Japan, UK, Germany, France and Italy. The respondent sample was nationally representative of the online adult population (18+) in each market.

The survey was conducted March 31st – April 27th, 2019 and the overall margin of error is +/- 1 percentage point (at a 95 percent confidence level); the margin of error within each country is +/- 3 percentage points (at a 95 percent confidence level). The survey probed respondents on how they view the role of technology in their lives and in society, both today and in the future.