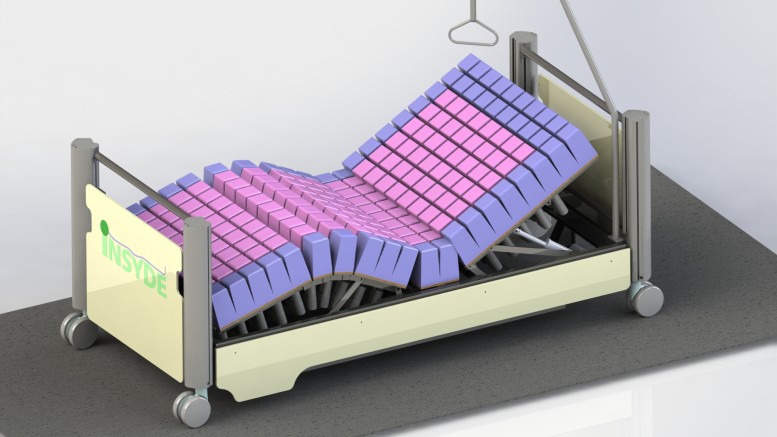 Some 400,000 people in Germany each year suffer from painful pressure sores on the skin, known as decubitus ulcers. These sores primarily affect bedridden patients who cannot be sufficiently mobilized, or whose position cannot be changed frequently enough. The Fraunhofer Institute for Integrated Circuits IIS collaborated with five partners in the development of a mattress that prevents and treats decubitus. From November 14 to 17, Fraunhofer IIS will be presenting a prototype of the mattress at the MEDICA trade fair in Düsseldorf.

The moving of bedridden patients places a serious physical and mental burden on nursing staff and family caregivers; it also takes considerable time. In Germany alone, there are hundreds of thousands of patients each year who cannot be sufficiently mobilized, or whose position cannot be changed frequently enough – and who, often after only a short period, develop what is known as a decubitus ulcer, a painful pressure sore on their skin.

Identifying the current lying position and suggesting a new one

To avoid the occurrence of decubitus and to treat already existing pressure sores, researchers at Fraunhofer IIS in collaboration with five partners in the INSYDE research project have succeeded in developing the technological prototype of an intelligent and adaptive mattress. The mattress identifies the patient’s current lying position and suggests a new position to relieve pressure.

Relieving the physical burden and time demands on caregivers

The system even goes a step further. Once cleared by a professional or a family caregiver, the shift in the patient’s position is automatically initiated by so-called actuators. “Like the sensors measuring the pressure distribution, the actuators are embedded in the mattress,” explains Christian Weigand, Head of the Department of Image Processing and Medical Engineering at Fraunhofer IIS. “Information on the repositioning and the pressure distribution created in the process will be shown on a display attached to the bed and will be automatically added to existing care documentation,” adds consortium leader Alexander Dürsch of the company Ergo-Tec. The project partner DRK Soziale Dienste Baden-Baden evaluated the intelligent bed during initial measurement series.

At the medical technology trade fair MEDICA, held in Düsseldorf from November 14 to 17, 2016, Fraunhofer IIS will be exhibiting the technological prototype for an intelligent nursing bed at stand G05 in hall 10, and is looking for partners interested in introducing the system in their clinical routine.