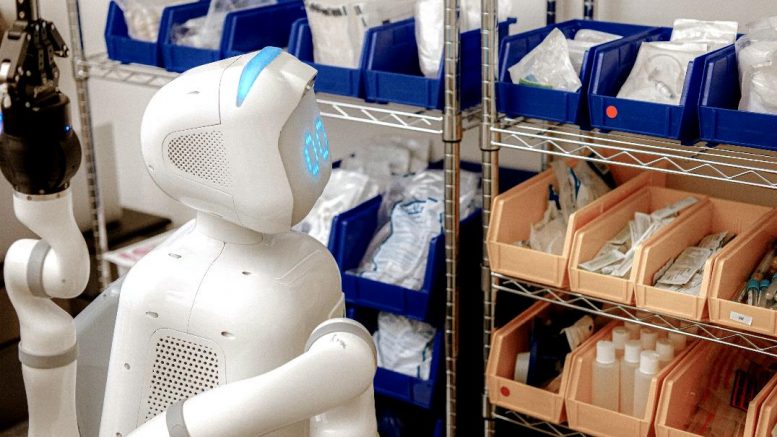 Diligent Robotics, the AI company building socially intelligent robots that help people with their jobs, announced today that it is launching its first product, hospital robot assistant named Moxi, out of beta into market, beginning with the roll-out of Moxi into a Texas hospital starting October 2, 2019.

Along with announcing the market availability of Moxi, Diligent Robotics also announced today that it has raised $3 million in seed funding to fuel the launch of Moxi. The round was co-led by True Ventures and Ubiquity Ventures and included investment from Next Coast Ventures, Capital Factory, Pathbreaker Ventures, Boom Capital, Grit Ventures, and additional angel investors. It followed two prior fundraising rounds including a $2.1 million seed round in January 2018 led by True Ventures and early support from the National Science Foundation in the form of Small Business Innovation Research grants totaling $725,000.

Founded in 2017, Diligent Robotics has quickly become the leader in the social robotics space as the first company to build a robot with social intelligence and mobile manipulation capabilities that helps humans in their work environments. Last year, Diligent Robotics launched Moxi, recently awarded as one of Fast Company’s World Changing Ideas in 2019, into beta phase which consisted of month-long trials at four U.S. hospitals. Following the positive results from Moxi’s trials, Diligent Robotics has completed its beta phase and is now launching Moxi into market with full-time hospital partners.

“Our vision is to improve the way people think about their work by giving them more time to utilize their unique human skills, and let friendly robot assistants efficiently take care of their chores,” said Andrea Thomaz, CEO and Co-Founder of Diligent Robotics. “We are proud to have the full support of our past investors as well as new key investors to accelerate the roll-out of Moxi robots into hospitals.”

The investment from this round will support Diligent Robotics’ launch of Moxi into its first full-time hospital customers and their continued investment in product strategy and development in both hardware and software.

“Over the last year, Diligent Robotics has made rapid progress in delivering and testing Moxi in multiple hospitals,” said Rohit Sharma, partner at True Ventures and board member for Diligent Robotics. “The team continues to demonstrate unmatched robotics-specific innovation by combining social intelligence and human-guided learning capabilities. We’re thrilled to continue our partnership with Vivian and Andrea as they build a world-class, leading robotics company.”

In addition to this funding round and completing Moxi’s beta phase, Diligent Robotics has reached key milestones in the last year including hiring Josh Tippy, Head of Clinical Integrations. Additionally, Diligent Robotics’ CTO and Co-Founder, Vivian Chu, received MIT Technology Review’s highly prestigious 35 Under 35 for 2019 award, and Thomaz was named one of Inc. Magazine’s 100 Female Founders in 2019 Building America’s Most Innovative & Ambitious Businesses.

“It is now obvious that robots will improve our quality of life, but only when implemented thoughtfully,” said Sunil Nagaraj, partner at Ubiquity Ventures and newly named board member for Diligent Robotics. “I am lucky to partner with such an experienced and agile team as they use Moxi robots to make hospitals better places for patients, nurses, and doctors.”