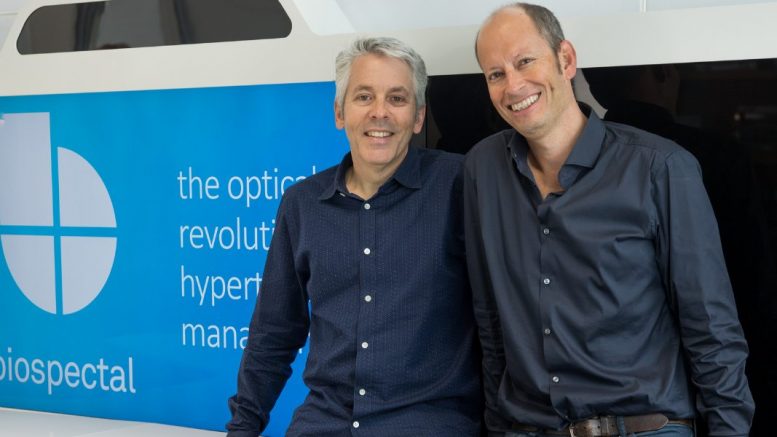 Funded by the Bill & Melinda Gates Foundation and Global Grand Challenges Canada’s Saving Lives at Birth initiative, the two research and validation studies include the integration of Biospectal OptiBP and focus on the routine measurement of blood pressure as well as assessment of hypertension during pregnancy

Biospectal, the remote patient monitoring and biosensing software company, today announced the next step in its commitment to global health by launching two independent research and validation studies using Biospectal OptiBP™. Currently underway in four low-resource countries, the studies center on the routine measurement and monitoring of blood pressure, assessment of hypertension during pregnancy, and enable global field testing and validation of Biospectal’s OptiBP smartphone app and data platform integration with the WHO’s Digital Antenatal Care module, following WHO SMART guidelines and built on the WHO Open Smart Register Platform (OpenSRP). The two new independent global health research and validation studies follow the recent publication of a large-scale, third-party research study in Scientific Reports in Nature, which demonstrated Biospectal’s ability to measure blood pressure as accurately as a sphygmomanometer, commonly referred to as a standard blood pressure cuff. Both new studies further Biospectal’s ability to transform the global network of smartphones into a connected, clinical-grade blood pressure monitoring platform — democratizing access and bringing the power of remote patient monitoring to people and communities worldwide.

Funded by the Bill & Melinda Gates Foundation, the first independent study is underway in three countries — South Africa, Tanzania and Bangladesh — and is concentrated on routine blood pressure measurement and monitoring as well as hypertension disorders during pregnancy. The second independent study in Indonesia is being conducted with the Summit Institute for Development (SID) in collaboration with Ona Kenya Limited and is funded through Grand Challenges Canada’s Saving Lives at Birth initiative, with additional backing from USAID, the Bill & Melinda Gates Foundation, Norwegian Agency for Development Cooperation (NORAD), the Korean International Cooperation Agency (KOICA) and the HRP Special Programme of Research, Development and Research Training in Human Reproduction. The study centers on hypertension disorders during pregnancy, including chronic hypertension, preeclampsia-eclampsia, preeclampsia superimposed on chronic hypertension and gestational hypertension. Findings from the two studies will be available in the first half of 2022.

“The ability for anyone to assess blood pressure accurately with a readily available device such as a smartphone opens the door to personal monitoring of many acute and chronic medical conditions. It’s a massive leap forward in technology toward empowerment for wellness, and crucial in the post Covid-19 world,” said Dr. Anuraj Shankar of University of Oxford, U.K., and Lead Investigator for Community Health at the Eijkman-Oxford Clinical Research Unit, and the Summit Institute for Development in Indonesia. “The synergy with other point-of-care tests and the transition to digital health globally means optimal care for pregnant women experiencing hypertension, and will lead to more healthy mothers and healthy babies.”

Hypertension is a global threat and is the leading cause of death worldwide, according to the WHO. Fewer than one in five of the estimated 1.13 billion people with hypertension have it under control, and two-thirds live in low- and middle-income countries. Hypertension prevalence rates are on the rise in developing countries with no improvement in awareness or control rates. As the only pure software solution on the market in an easy to use smartphone app, Biospectal is the answer to the major problem of monitoring and measuring blood pressure in developing countries. “For low and middle-income countries around the globe, this type of technology is a game-changer in the fight against non-communicable diseases, dominated by hypertension and cardiovascular disease,” says Professor Alain Labrique, Director of the Johns Hopkins Global mHealth Initiative and Associate Chair for Research in International Health. “For the billions of people living in remote, rural communities, having access to accurate blood pressure readings will enable early diagnosis and hopefully, treatment — preventing illness and loss of life.”

“Smartphones are the number one device worldwide and someone in Tanzania or Indonesia is more likely to have a smartphone than any other consumer device. Biospectal’s pure software and app approach simultaneously democratizes access to blood pressure measurement and monitoring due to the widespread worldwide availability of smartphones,” said Biospectal CEO and co-founder, Eliott Jones. “We can scale our modern, medical-grade, easy-to-use blood pressure measurement and monitoring OptiBP technology globally with extreme efficiency to any country, at any time.”