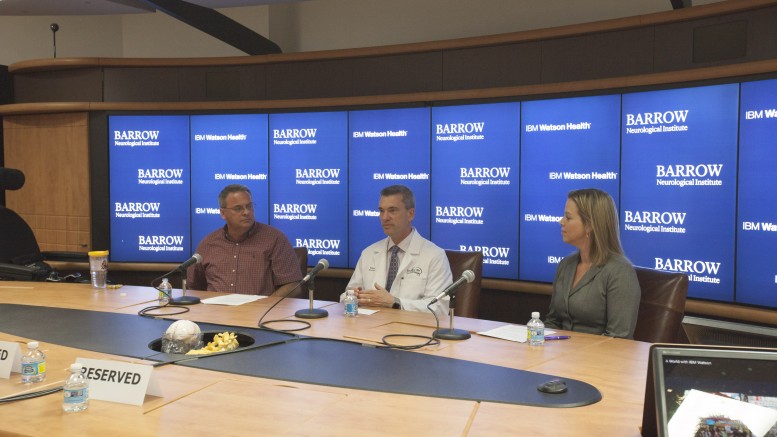 Barrow Neurological Institute and IBM Watson Health announced results of a revolutionary study that has identified new genes linked to Amyotrophic Lateral Sclerosis (ALS), also known as Lou Gehrig’s disease. The discovery gives ALS researchers new insights that will pave the way for the development of new drug targets and therapies to combat one of the world’s most devastating and deadly diseases.

The groundbreaking discovery involved IBM Watson, a cutting-edge form of artificial intelligence, to help unravel the mysteries of the brain and provide Barrow scientists with never-before-known data. IBM Watson became known around the nation in 2011 when it competed against human contestants on Jeopardy, and won.

“We are very excited about this discovery,” says Robert Bowser, PhD, director of the Gregory W. Fulton ALS Research Center at Barrow Neurological Institute and one of the nation’s leading ALS researchers. “ALS is one of the most complicated diseases to unravel and there is no cure. We hope that the use of IBM Watson for Drug Discovery will allow us to identify new and more effective treatments for ALS.”

ALS is a progressive and degenerative disease in which the cells that control voluntary muscle movements die, leading to paralysis and, ultimately death. Scientists don’t yet know what causes ALS and there is just one FDA-approved medication but is only marginally effective. Most individuals die from ALS within three to five years from the onset of symptoms. Approximately 6,000 people are diagnosed with ALS every year.

Barrow began working with IBM last year to explore unidentified genes and proteins that may be linked to ALS using its life sciences solution, Watson for Drug Discovery. The cognitive tool, which uses machine learning, natural language processing, and other cognitive reasoning technologies, was trained about proteins that Barrow already knew were related to the disease using data given by Barrow as well as all published research information surrounding ALS.

Within months, Watson for Drug Discovery rank ordered all of the nearly 1,500 genes within the human genome and proposed predictions regarding which genes might be associated with ALS. The Barrow team then examined Watson’s top evidence-based predictions and found eight of the top 10 ranked genes proved to be linked to the disease. More significantly, the study found five never before linked genes associated with ALS.

Without IBM Watson for Drug Discovery, researchers predict the discovery would have taken years rather than only a few months. Barrow, located at Dignity Health St. Joseph’s Hospital and Medical Center and is considered one of the world’s leading neuroscience centers.

“We could have individually looked at the 1,500 proteins and genes but it would have taken us much longer to do so, “says Dr. Bowser. “IBM Watson for Drug Discovery, with its robust knowledge base, was able to rapidly give us new and novel information we would not otherwise have had.”

The newly launched Watson for Drug Discovery is a cloud-based offering that aims to help researchers identify new drug targets and alternative drug indications. It is among a growing portfolio of products to help the life sciences community address the long, complex and costly process of drug discovery and development. This marks IBM Watson Health’s first collaboration dedicated to understanding neurological diseases.

“Traditional research tools are fast becoming inadequate to help data scientists and researchers keep pace with and find relevant insights among the now billions of documents which are spread all over the world,” said Dr. Tina Moen, PharmD, Deputy Chief Health Officer for IBM Watson Health. “Watson for Drug Discovery can help organizations far more rapidly pinpoint the most promising paths to drug discovery.  We are honored to support Barrow’s efforts to identify the underlying cause of ALS.”