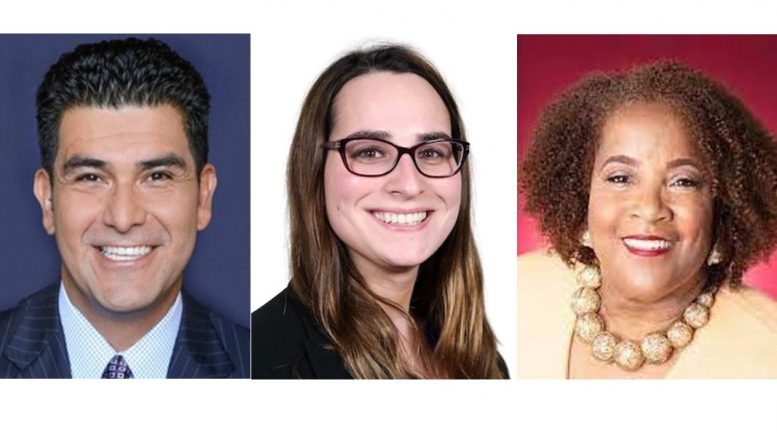 Israel Balderas, Danielle McLean and Cheryl Smith join the Society of Professional Journalist Board of Directors.

The Society of Professional Journalists Board of Directors has selected its two appointed members for 2021-22 and approved a third member to fill a vacancy on the board.

Israel Balderas and Cheryl Smith were appointed during Saturday’s virtual board meeting and Danielle McLean was approved to fill the vacancy left by Claire Regan who was voted president-elect earlier this month.

Balderas is an Emmy award-winning journalist, attorney and assistant professor of journalism at Elon University. His teaching and research focus on freedom of the press and access to public records influenced by artificial intelligence technologies. Prior to his academic appointment at Elon, Balderas taught journalism and media law at Palm Beach Atlantic University, where he also served as the faculty adviser to The Beacon Today, the school’s student-led publication.

Before transitioning from the newsroom to the classroom, Balderas worked as a journalist at local TV stations, news agencies and cable networks. He was as an anchor/reporter at TV stations in West Palm Beach, Florida; Charlotte, North Carolina; and El Paso, Texas. He also worked as a producer for FOX News Sunday with Chris Wallace and Special Report with Brit Hume. His news experience working in Washington, D.C. includes The Associated Press Latin America and Reuters.

McLean is senior editor at Smart Cities Dive, a national online news publication that covers the most impactful news and trends shaping smart cities, and is proudly the first known openly transgender woman to serve on SPJ’s Board. McLean is a current member and former chair of the SPJ Ethics Committee, where she promotes the tenets of SPJ’s Code of Ethics. As president of the SPJ New England Chapter and chair of the Freedom of Information Committee, she was a staunch advocate of the free press and the public’s right to know, overseeing the development of The Whistleblower Project.

Previously, she was staff reporter at The Chronicle of Higher Education where she covered federal and state higher education policies. She is also a former award-winning investigative reporter at the Bangor Daily News and later, ThinkProgress. She has also covered Massachusetts city halls for several newspapers including the Somerville Journal, The Milford Daily News and The Boston Globe.

Smith has been an award-winning multimedia journalist for more than 40 years. A graduate of Florida A&M University, she began working at the Capitol Outlook in Tallahassee and has moved on to several positions with her works appearing in Florida Flambeau, Dallas Weekly, Dallas Examiner, Dallas Times Herald, Westside Gazette, Dallas Morning News and the NNPA Newswire.

The publisher/editor at I Messenger Media LLC, Smith has served as regional director and secretary for the National Association of Black Journalists and president of the Dallas/Fort Worth Association of Black Journalists. She sits on Boards of the National Newspaper Publishers Association and SPJ Fort Worth. In addition to chairing the communications department at Paul Quinn College, she has taught at the University of North Texas, Texas Woman’s University and Dallas College.

“I’m thrilled to welcome Israel Balderas, Danielle McLean and Cheryl Smith to the SPJ Board of Directors,” said SPJ National President Rebecca Aguilar. “They will continue to sharpen our focus on student journalism, diversity and inclusion, attracting new members to SPJ and carrying out the rest of SPJ’s strategic plan.

“The diverse experiences, ideas and enthusiasm they bring to the SPJ board will make SPJ, and journalism overall, stronger and better,” Aguilar said.

SPJ promotes the free flow of information vital to informing citizens; works to inspire and educate the next generation of journalists; and fights to protect First Amendment guarantees of freedom of speech and press. Support excellent journalism and fight for your right to know.