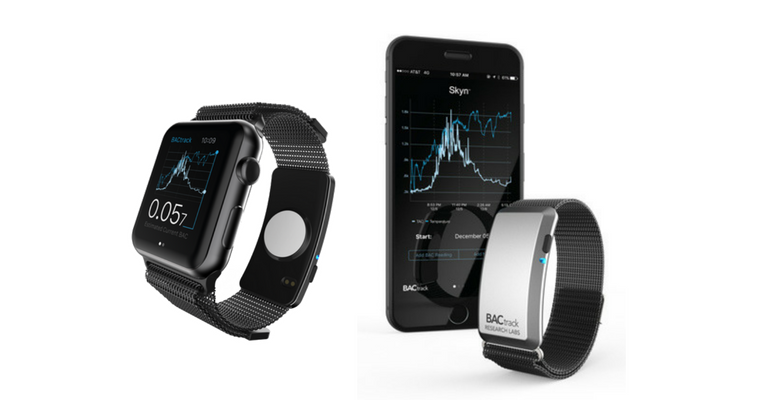 BACtrack reinvents the way people track their alcohol consumption; glance at your wrist at BACtrack Skyn and learn your approximate alcohol level in near real-time.

BACtrack®, the leader in personal and professional breathalyzers, unveiled BACtrack Skyn, the world’s first wearable alcohol monitor. BACtrack Skyn completely reinvents alcohol monitoring by measuring alcohol eliminated through the skin – both continuously and in near real-time.

A user wears BACtrack Skyn on the wrist, either integrated into an Apple Watch band or as a standalone wearable. The app that connects to either device offers powerful and actionable data. For instance, a user can learn when they’re approaching higher alcohol levels and slow down or stop their drinking. Best of all, this breakthrough in alcohol testing is effortless – the device passively tracks a user’s alcohol level; there’s no need to use a breathalyzer.

The latter model is a smaller and improved version of the prototype recently awarded the grand prize and $200,000 in the 2016 National Institutes of Health (NIH) ‘Wearable Alcohol Biosensor’ competition. The goal of the competition was to find an accurate, non-invasive and continuous way to measure a user’s alcohol level in order to aid researchers.

“We’re excited to introduce a breakthrough innovation in alcohol monitoring, making it simple for people to track their alcohol level — passively, accurately and near real-time. We’re thrilled to finally share these devices, which have been in development for more than two years” said Keith Nothacker, President and CEO of BACtrack. “BACtrack has made breathalyzers low-cost, sleek, and a safety product that anyone can and should use, and we have the same vision for BACtrack Skyn,”

Both BACtrack Skyn prototypes work the same way — they measure the small amounts of alcohol, or ethanol molecules, excreted through the skin; this measure is Transdermal Alcohol Content or TAC. Unlike a breathalyzer test, which provides a BAC (Blood Alcohol Content) estimate at a given point time, a TAC measurement is continuous – the estimated alcohol level is just there on one’s wrist, continuously.

BACtrack is working on a proprietary algorithm that converts measured TAC to an estimated BAC, the metric with which most people are already familiar (0.08% BAC is the legal driving limit).

A Breakthrough in Alcohol Monitoring

BACtrack Skyn has the potential to have an enormous impact on health and safety on both an individual and societal level. Every year, more than 10,000 Americans die in alcohol-related auto accidents. Globally, 3.3 million deaths – 5.9% of all deaths – are attributable to alcohol. Without a doubt, alcohol consumption is an issue of enormous consequence globally. This is the reason BACtrack has worked hard to make BACtrack Skyn a low cost, easy to use, and attractive technology.

BACtrack Skyn for Personal Use

Individuals curious about their alcohol consumption and those wanting to drink in moderation or ensure they’re safe to drive are among those that will benefit from BACtrack Skyn. Using an objective measurement tool to track alcohol consumption will ultimately lead to fewer instances of impaired driving and greater insight when it comes to drinking.

Additionally, with over 16 million individuals in the in the U.S. suffering from a clinically defined Alcohol Use Disorder (AUD), BACtrack Skyn is a game changer for sobriety monitoring, a service that’s currently expensive and intrusive. An individual can gain peace of mind knowing a family member’s BAC level remains at 0.00% remotely and in near real-time; alternately, a user can easily track their own sobriety and share results with others.

BACtrack Skyn for Professional Use

Currently, there are no affordable and reliable options for clinicians and researchers to monitor a patient or a participant’s alcohol level continuously; this was the impetus for the 2016 NIH “Wearable Alcohol Biosensor Challenge.” There are monitoring bracelets typically used in the criminal justice system, but these are expensive, cumbersome and have limited capabilities to estimate alcohol levels. There is participant self-reported data, but it’s often unreliable.

The availability of a low cost, passive alcohol monitoring device that sends data to doctors or researchers has the potential to radically reduce healthcare expenses related to alcohol consumption and help researchers discover new treatment options. Researchers at Harvard, University of Pennsylvania, Duke, John Hopkins and other universities are signed up to test BACtrack Skyn prototypes as soon as they become available.

BACtrack Skyn will be available in 2017. To learn more and sign up to be among the first to purchase BACtrack Skyn visit BACtrack.com/skyn.