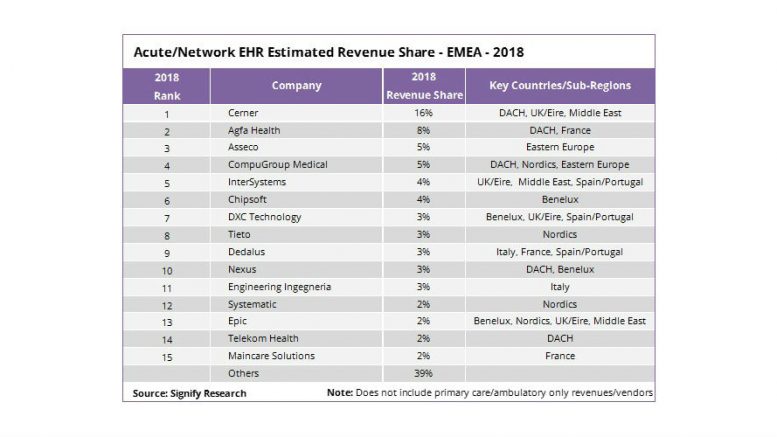 The EMEA market for EHR IT is estimated to have been worth $3.7B in 2018 (both acute and ambulatory applications) according to Signify Research’s 2019 global EMR market report. However, only one vendor, Cerner, is estimated to have had a double-digit revenue share. Despite its recent announcement that it will potentially sell its Hospital IT and Integrated Care business, Agfa Health was the only other vendor to come close. In terms of suppliers, the market is highly fragmented with a mixture of local vendors and international vendors addressing individual country markets and with few vendors having a truly region-wide footprint.

The below table shows estimated revenue shares in 2018 for the acute & health system EHR market in EMEA (excluding revenues for ambulatory only EHR solutions). It also shows the countries/sub-regions where each vendor had a significant share of its business in EMEA.

Examining the competitive environment in several major countries/sub-regions in EMEA:

• The acute market in UK/Eire is served by many suppliers with Cerner, InterSystems, iMDsoft, System C, Allscripts and DXC Technology having the largest share of acute trust business in the UK in 2018 and MEDITECH, DXC Technology and Cerner dominating Eire. A different set of vendors serve the primary care market with Emis, TPP, Cegedim (Vision Health/INPS) and Clan William having the largest shares, partly due to some regionalised procurement.

• The French market is highly fragmented with Maincare Solutions, Agfa, CEGI, SIB and Berger Levrault having the largest share of the acute market in 2018 and Cegedim being the leading primary care EHR vendor. Some consolidation is forecast over coming years as procurement moves to the Territorial Hospital Groups (GHTs).

• In the DACH region (Germany, Austria, Switzerland), CompuGroup Medical had the largest revenue share in 2018 across both the acute and ambulatory sectors, with Agfa, Cerner, Telekom Health and Nexus also significant players. Gematik’s Telematics Infrastructure demands are redefining EHR solution requirements in Germany and CompuGroup Medical was able to leverage first-mover advantage here in 2018 increasing its market share.

• Cerner and DXC Technology have historically benefited from large EHR contracts in several of the 17 autonomous regions in the Spain/Portugal region. However, several other international and local vendors such as Indra, InterSystems, Everis, Alert, Oesia and Dedalus also had sizeable shares. Integrated care initiatives will drive market growth in Spain; however, this is not forecast to result in significant vendor consolidation.

• The Nordic region has regionalised much of its EHR procurement over recent years with several countries focusing on integrated care initiatives (e.g. development of sote-areas in Finland). This has resulted in some consolidation in the supplier base; however, it’s local vendors such as Tieto, Systematic, DIPS, Evry and Cambio Health that hold the largest share. That said, international vendors (e.g. Cerner and Epic) did gain share in 2018 and are expected to continue to disrupt the market (despite some well publicised issues with Epic’s implementations in Denmark and Finland).

• The Italian EHR market is largely served by local IT generalists such as Engineering Ingegneria Informatica, Reply and GPI Group. Regionalised procurement has resulted in some vendor consolidation over the last few years. Dedalus, has also had success with regionalisation and is the exception in that it’s the only Italian vendor to have a sizable international business.

• The Middle East & Africa region bucks the trend for local vendors to some extent. Cerner, DXC Technology, InterSystems and Epic all having won sizeable contracts in recent years, particularly in the UAE and Saudi Arabia.

Other International Markets Outside EMEA & the US

Signify Research’s report also provides analyses of the competitive environment across Asia and Latin America. Again, most markets are a mix of local and international vendors, with some markets such as Japan almost completely served by local vendors.

• In Oceania Cerner, Allscripts and InterSystems have won several state/territory-wide public hospital contracts in Australia, and Orion Health and DXC Technology have benefited from regionalised EHR procurement projects in New Zealand. However, most states/territories in Australia have not regionalised their EHR procurement. In these states/territories Epic has won several large individual hospital contracts (particularly in Victoria) and vendors such as Telstra, DXC Technologies, Philips and Allscripts (with its BOSSnet solution) have had success in the smaller hospital and private hospital market.

• The public hospital market in China is dominated by local vendors such as Neusoft, Winning Health Technology Group and BSoft. There was a large number of new contracts allocated in 2018 but these were typically very small in value and often not attractive to international EHR vendors. Larger opportunities were seen in the private hospital market in 2018 and it’s here that international vendors such as InterSystems and DXC Technology are having success.

• Brazil was the largest EHR market in Latin American in 2018 and again it is one that is dominated by local vendors, such as MV Sistemas, Benner and Pixeon. That said several international vendors also had sizeable shares in 2018 (e.g. Philips and Agfa). However, both gained this share via local vendor acquisitions several years ago.

• Japan is the second largest EHR market in the world and one that is projected to see an upturn in growth over the coming years as installations are upgraded and several integrated care initiatives drive the market for interoperability/data sharing solutions. However, it’s dominated by Japanese vendors such as NEC, Fujitsu, CSI and PHC Holdings. Western vendors were actively assessing how to tap into the Japanese market during 2018; however, success is likely to be a challenge.

As the US market for core-EHR solutions starts to saturate, international vendors are increasingly looking to geographic expansion to maintain their historic growth rates. This will lead to increased levels of competition in many of the markets discussed above. Some vendors will succeed; however, expanding into new international markets is a strategy that has many pitfalls and vendors need to understand the nuances of local markets in terms of product requirements, government initiatives and local vendors’ strengths if they are to succeed.

Historically, there have been two major points of entry into a new geography; either through a partnership to gain expertise and ‘localise’ a solution or through acquisition of a local vendor. Both have their challenges, with acquisition often resulting in the long-term support of a legacy solution (e.g. Cerner is still supporting several legacy Siemens EMR solutions nearly five years after announcing its acquisition plans) and partnerships often being slow. Examples where vendors have taken on large regional projects before ‘localising’ solutions, have often resulted in projects running over budget and negatively affecting both vendors and providers alike. By aligning closely with the major purchasing organisations and taking a more informed strategic approach to market entry, there are still significant opportunities for the right vendor.