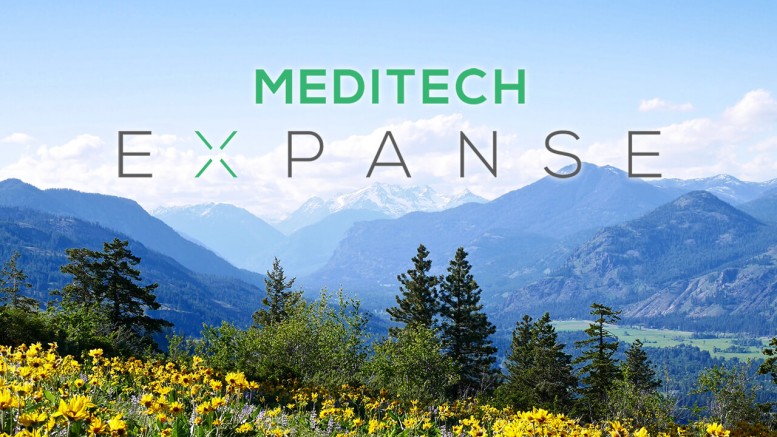 MEDITECH hit the ground running in 2018, signing both new and current customers to move forward with its state-of-the-art Expanse EHR

The excitement surrounding MEDITECH and Expanse, the company’s state-of-the-art, web-based Enterprise Health Record (EHR), has continued to build throughout the first quarter of this year. Building on a successful 2017, which saw MEDITECH sign 92 organizations for Expanse, 2018 is showing no signs of slowing down. Over the past several months, MEDITECH has signed a number of new and current customers to move into the future with MEDITECH Expanse, and take healthcare innovation as well as quality to a new level.

“We were excited to have experienced such a successful 2017, but we are truly just getting started. It is thrilling to see this momentum carrying over into 2018,” said MEDITECH Executive Vice President Helen Waters. “Our bold vision for healthcare is to provide an EHR solution that enhances, not hampers, the lives of clinicians and patients. Expanse is hitting the mark on both accounts. The pivot is real for MEDITECH, and I’m looking forward to a successful year for our company and customers.”

New and existing MEDITECH customers appreciate that Expanse is designed to serve today’s healthcare environment, while also preparing these organizations for the demands of the new healthcare paradigm. The relationship longevity between MEDITECH and its customers demonstrates a shared common goal of making both healthcare and technology better than they have ever been. Some of MEDITECH’s signings from Q1 2018 include:

“Making a decision about the electronic record that will be the foundation for clinical and non-clinical operation of our hospital took a monumental effort,” said Felix Mercado, chief financial officer at Lawrence General Hospital. “We are very satisfied with our choice and looking forward to transition to a product that we feel best meets the needs of our patients and the organization.”

Calvary Hospital
Calvary Hospital, based in the greater New York City area, is the country’s only fully accredited hospital devoted to providing palliative care to adult patients with advanced cancer and other life-limiting illnesses. Calvary was intent on selecting an EHR able to meet the various needs of their clinicians. The clinical sophistication and cohesive nature of Expanse made this platform a perfect fit.

“Our EHR selection committee was deeply committed to the choice of MEDITECH Expanse,” said Kathleen Parker, chief information officer for Calvary Hospital. “The implementation of this system will represent a new direction for us. We are looking forward to this integrated and robust solution that will support Calvary well into the future.”

Ozarks Medical Center
A MEDITECH customer since 2004, Ozarks Medical Center (OMC) will be moving forward with MEDITECH Expanse to continue providing high-quality care in southern Missouri and northern Arkansas. The clinical sophistication of a fully integrated system was paramount in OMC’s decision.

“Expanse will assist us in providing the best customer service to every patient, every time we see them,” said Tom Keller, president and CEO at OMC. “As we move forward in expanding the footprint of OMC, we continue to focus on the growing needs of patients. MEDITECH is essential in getting us to the next level for the communities we serve.”

“With all of the changes in regulatory requirements, we felt it was in the best interest of the health system to have a totally integrated health record, as well as a solution that is both flexible and allows for mobility. MEDITECH Expanse meets those needs,” said Mathew Gaug, chief information officer at Lima. “We are longtime MEDITECH customers, and we look forward to continuing that relationship to bring LMHS a totally integrated inpatient and outpatient record.”
In addition to bringing new customers into the fold, MEDITECH is dedicated to growing with their current customers and moving with them into the future. Avera Health, headquartered in Sioux Falls, SD, recently signed a contract for an additional site to deploy Expanse in both the acute and ambulatory space.

If you’re heading to the 2018 International MUSE Conference (May 29-June 1), don’t miss out on your chance to see MEDITECH Expanse in action. See what demonstrations and educational sessions we have in store!