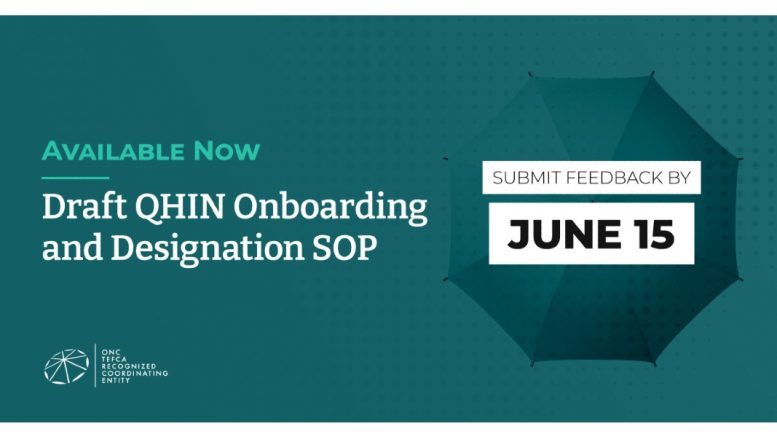 Releases Include Definitions, Updated QHIN Security Requirements for the Protection of TEFCA Information, and the List of Cybersecurity Certifications Under Consideration

The Sequoia Project, selected by the Office of the National Coordinator for Health IT (ONC) as the Recognized Coordinating Entity (RCE) to support the implementation of the Trusted Exchange Framework and Common Agreement (TEFCA), today released additional details regarding the process and requirements for becoming a Qualified Health Information Network (QHIN). The Sequoia Project is requesting feedback on these items before the final documents are released.

“Throughout the TEFCA development process, we’ve sought to instill the principles of transparency and community engagement, which are core to The Sequoia Project’s values,” said Mariann Yeager, chief executive officer of The Sequoia Project. “The feedback we receive through our events, website, and email has been invaluable as we operationalize TEFCA and finalize implementation resources. We look forward to another robust round of engagement regarding the QHIN Onboarding and Designation SOP and the QHIN Application this month.”

The items being released for review include:

The RCE is seeking stakeholder input on all three documents through June 15, 2022. Drafts are available on the RCE website.

In addition, the forthcoming SOPs are listed in the table below:

“Since TEFCA’s release on January 18, 2022, we’ve been entirely focused on hitting our promised timeline of potential live exchange before the year’s end,” continued Yeager. “We look forward to the thoughtful input of potential QHINs and other stakeholders to carefully consider these drafts. Remember that these documents are just that – drafts. We’re not accepting application submissions at this time.”

It is anticipated that the final QHIN Onboarding and Designation SOP Version 1 and final QHIN Application Version 1, both expected in late summer, may differ from the drafts released today, depending on feedback received.

The RCE also released the updated “QHIN Security Requirements for the Protection of TEFCA Information (TI) SOP” on the RCE website and launched an online resource where it will maintain a list of cybersecurity certifications for QHINs. Per the Common Agreement, QHINs must achieve and maintain third-party certification to an industry-recognized cybersecurity framework demonstrating compliance with all relevant security controls.

Prospective QHIN organizations can now access the initial list of cybersecurity certifications published on the RCE website to prepare themselves for the application and potential onboarding process.

On Tuesday, May 17th at noon Eastern time, the RCE will host its monthly informational call and will review today’s release at a high-level. The RCE will also be hosting a public webinar on Wednesday, May 25th, 3 p.m. to 5 p.m. Eastern time, which will be a focused review of the draft QHIN Onboarding and Designation SOP and draft QHIN Application. Registration is now open for both events: https://rce.sequoiaproject.org/community-engagement/.