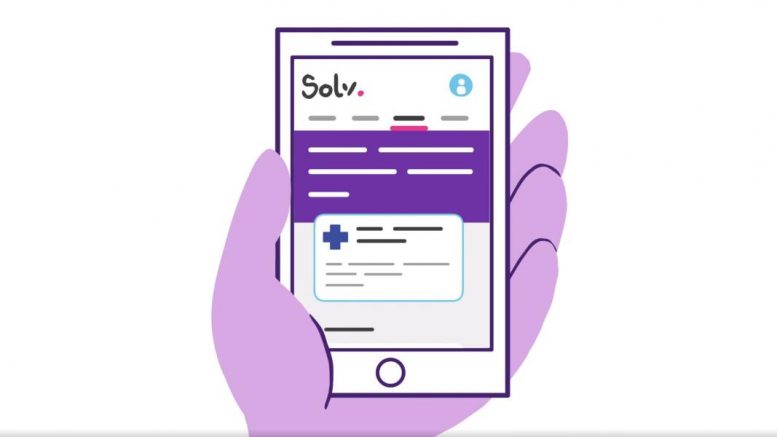 Solv Health, a San Francisco-based urgent care booking platform, today announced the launch of their Android app in response to overwhelming consumer demand. Since releasing their first-ever mobile app for iPhone in October 2019, more than one-third of Solv’s direct bookings have come from the app.

Consumers continue to prove that they’re hungry for more information about their healthcare and want increased and more convenient access to providers. For the past two decades, many healthcare technologies were confusing, complicated, and required too many clunky steps to do tasks that should be simple, such as booking doctor’s visits or understanding insurance deductibles. Because the technology available wasn’t on par with other industries, consumers didn’t adopt or didn’t engage.

When it comes to managing their healthcare, consumers want to do so on their own terms, no matter where they are. Solv created a way for them to do just that. Their recent survey found that only 6% of consumers currently manage their healthcare through an app on their phone, but 61% would if it were easy. Between the launch of Solv’s iOS app and now the addition of an Android app in the Google Play Store, they are seeing this confirmed by consumer behavior directly. Solv app users are 34% more likely than website users to add their health insurance and 79% more likely to search for and book a visit with an urgent care center in the app than a non-app user is.

Solv’s newest feature, an insurance tracker that allows users to monitor healthcare spending and access various preventative perks, has proven their hypothesis that empowered consumers with access to personalized, digestible information, are more involved with their care. More than one-third of Solv users are returning to the app to review their insurance and engage with the insurance feature —  unprecedented numbers.

Solv is putting even more users in the driver’s seat when it comes to their healthcare. With over half a million users opting into Solv’s consumer email messaging in the last year, they have cracked the code on providing consumers with the information they need when they need it.

“Consumers want to engage with this information. The Solv iOS and Android apps serve as a new distribution channel for our urgent care partners, giving them an additional touchpoint to engage their patients and drive loyalty,” says Solv’s Head of Product, Gemmy Tsai. The Solv app also provides a loyalty loop for users – 97% of consumers rebooking through Solv return to the same clinic where they were previously seen. “They’re using Solv because it makes managing healthcare easier than ever,” says Tsai.