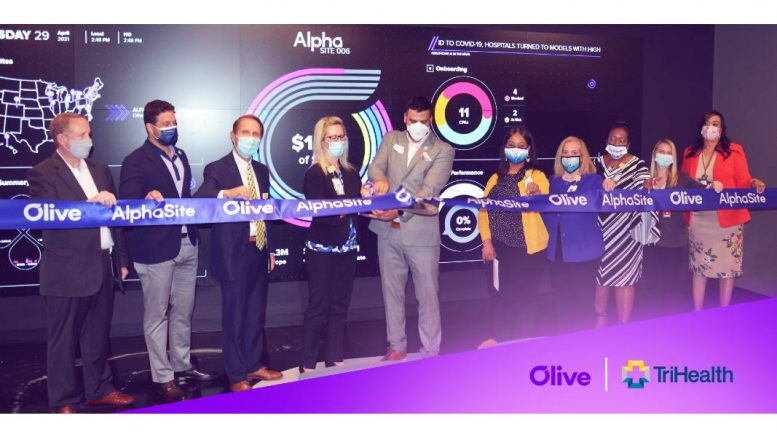 The addition of Olive will help TriHealth further its journey in achieving the “Triple Aim” of providing better care, better outcomes and better value to its patients and the community. Olive has started in TriHealth’s revenue cycle department by optimizing processes like claims status checks. The system can be rapidly scaled to meet needs as they arise.

“In every industry, as digital and information technology has been introduced, it has resulted in greater efficiencies. That has not been the case in healthcare. The implementation of technology has resulted in increased costs in our industry,” said Mark C. Clement, President and CEO of TriHealth. “The promise of Olive is we will be able to deploy artificial intelligence to create greater efficiencies and improved effectiveness allowing us to automate routine processes.”

Olive is the only AI workforce solution designed specifically for healthcare. The AlphaSite program — the creation of an on-site AI command center — allows Olive to take a 360-degree approach to transform the entire healthcare enterprise by laying a foundation of interoperability to generate intelligence and outcomes. There are currently 22 Olive AlphaSites nationwide.

“Healthcare is drowning in data because the industry has been collecting information for decades, but the data lives in siloes. Olive connects healthcare’s disparate systems to create a network of intelligence,” said Sean Lane, CEO of Olive. “With the help of forward-thinking customers like TriHealth, we are building the Internet of Healthcare.”

Working with Olive will bring immediate and long-term benefits to TriHealth, which in turn will impact the entire community it serves.

“Olive is not just about improving the revenue cycle space,” said Emily Seitz Pawlak, Vice President of Revenue Cycle of TriHealth. “With our partnership, we have visions to expand the use of AI and automation into as many areas of healthcare as possible, including the clinical side, all with the goal of delivering an even better healthcare product to our patients.”