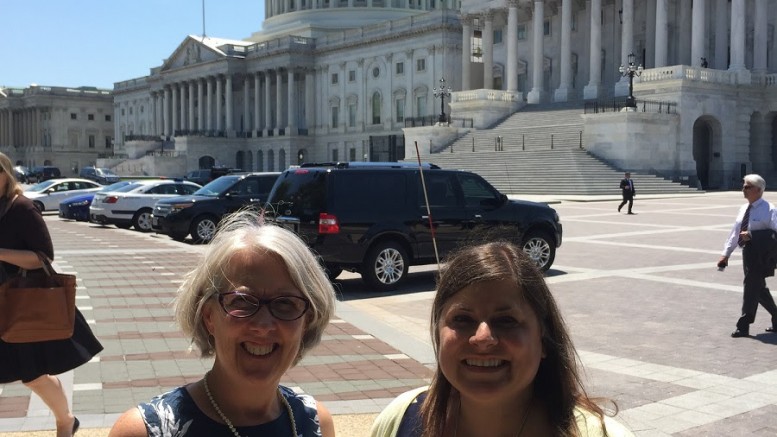 Washington, DC — As an occupational therapist who coordinates therapy services for 34 public schools in Virginia, Marbea Tammaro sees first-hand the tremendous impact that occupational therapy afforded by Medicaid dollars can have on her students’ success.

“One of my students had a stroke at birth and has weakness on one side of his body. When he was a preschooler, I worked with him to learn to feed himself, put his shoes on, and use two hands when playing and doing early academic work,” said Tammaro, MEd, OTR/L, an occupational therapist for 30 years who got her start in mental health at Johns Hopkins Hospital and has been helping families and children with special needs to access and participate more fully in school for more than 20 years. “I remember working with him at arrival and dismissal at preschool on how to manage a backpack, how to open a zipper, and how to hold with one hand and deal with the zipper with the other hand.”

Working with this student again in high school, Tammaro supported his transition from using textbooks and binders to electronically organizing his academic materials. She helped him with organizational skills, including strategies to keep track of his classes, schoolwork, and assignments.

“Occupational therapy practitioners in the public school system work at multiple schools to provide the services needed for kids with IEPs and 504 plans,” said Tammaro, adding that the Individuals with Disabilities Education Act (IDEA) and the Every Student Succeeds Act (ESSA) laws do not fully cover the cost to provide services to students with special needs. “Not having access to Medicaid funding would mean fewer services to all students—both students with disabilities and students in the general education setting. We encourage continued funding of Medicaid funding in schools.”

Tammaro recently shared her story at the foot of the U.S. Capitol Building alongside parents of children with special needs, and U.S. Sen. Bob Casey, Jr. (D-PA) and Sen. Maggie Hassan (D-NH). The group explained how the provisions to restructure Medicaid, contained in the House-passed bill, would affect schools.

In a press statement, Casey called the changes to Medicaid “an abomination” and Americans need to “fight like hell” to preserve them. Currently, schools receive more than $4 billion in both state and federal Medicaid support.

Medicaid has helped to fill the gap that has been left by the federal government not fully funding IDEA. Many states and school districts rely on Medicaid reimbursement to help pay for Medicaid-eligible IDEA services and to help provide other non-mandated services that support at-risk students in general education settings.

“This money provides basic protection and basic help for those in need of special education services, health screenings, early intervention, and pre-k programs,” Casey said. “All of these are at risk.”

During the press conference, Julie Gerhart Rothholz of Souderton, PA, whose six-year-old son Evan has Down syndrome, talked about the value of his occupational therapists, physical therapists, speech therapists, teachers, and aides.

“It takes a village to make him have success, and its early intervention that will help him to have success later in life,” said Rothholz, adding that her greatest fear as a parent is a reduction in the funding that makes all of this possible. “Every therapy session is a step toward independence, is a step toward making him the adult he is going to grow into.”

Founded in 1917, AOTA represents the professional interests and concerns of more than 213,000 occupational therapists, assistants, and students nationwide. The Association educates the public and advances the profession of occupational therapy by providing resources, setting standards including accreditations, and serving as an advocate to improve health care. Based in Bethesda, Md., AOTA’s major programs and activities are directed toward promoting the professional development of its members and assuring consumer access to quality services so patients can maximize their individual potential. For more information, visit www.aota.org.