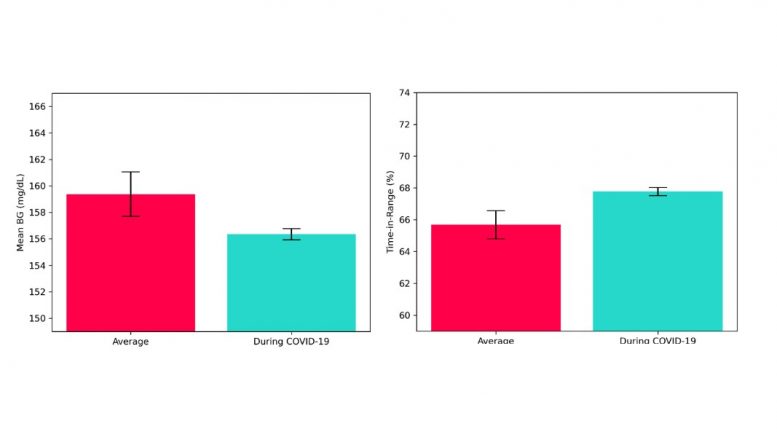 Diabits is an artificial intelligence-powered, predictive diabetes management app for people with type I and type II diabetes who use a continuous glucose monitor (CGM) to monitor their daily blood sugar fluctuations.

“Prior to the COVID-19-related shelter-in-place orders across the United States in mid-March, our users would typically see a distinct weekly pattern consisting of relatively higher than average blood glucose on the weekends, with peaks on Saturdays and Sundays,” said Amir Hayeri, CEO of Bio Conscious. “However, the data shows that since the shelter-in-place order was implemented in the US, the weekly pattern has begun to change. U.S. Diabits users had an increased time-in-range (TiR) and lower mean blood glucose (BG) during the Covid-19 pandemic (as measured from the start of the national emergency declaration in the U.S.). This may be because the day-to-day lifestyle of weekdays and weekends has become increasingly similar.”

The data showed that mean blood glucose, which typically averages 159 mg/dl, throughout the shelter-in-place period has been averaging 156 mg/dl; and time-in-range has shifted from less than 66% to 68%.

Historically, the data has shown higher glucose values almost across the board for weekends, which is usually due to weekend indulgences and increased alcohol intake, but these have since begun to disappear. Most adults with type 1 and type 2 diabetes using CGM or flash monitoring devices, showed an increase in time-in-range, with no significant rise in hypoglycemia during the first few weeks after quarantine began, compared with prior weeks.

Slight peaks were observed in average glucose on April 12th and 13th corresponding to Easter Sunday and Monday.

“This observation suggests that a slowing down of routine daily activities, had slight favorable effects on glucose control in the short term,” added Hayeri. “It’s possible that such an improvement occurred because patients had more time to concentrate on diabetes control and had a more regular lifestyle, including the timing and composition of meals, while not being exposed to workplace stress. In addition, we speculate that the knowledge that diabetes worsens the outcomes of COVID-19 may have improved patients’ awareness and compliance to diabetes management.”