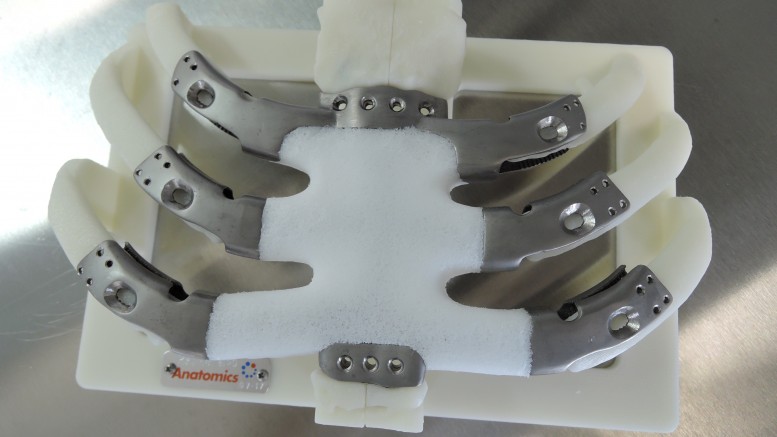 A partnership between CSIRO, Australia’s largest research organization, and medical device company Anatomics has led to the first successful implantation of a 3D-printed titanium and polymer sternal and rib cage prosthesis in a U.S. patient.

Anatomics, an Australian medical device company whose US operations are now co-located at CSIRO’s new Silicon Valley office, designed the sternal and rib cage prosthesis and printed it at CSIRO’s Lab 22 facility in Melbourne.

“We are fortunate to have formed such a strong partnership with Australia’s preeminent research organization to bring state-of-the art medical technology to patients across the globe. CSIRO’s presence in the U.S. has been a boon to us as we seek to bring our global leadership in patient-specific technology to the U.S.,” said Dr. Dean Carson, Vice President of Anatomics US Operations.

3D printing has significant advantages over traditional manufacturing methods, particularly for biomedical applications. 3D printing allows for advanced personalization of implants so they uniquely fit their recipients, as well as rapid manufacture, which could mean the difference between life and death for a patient waiting for surgery.

The operation is the latest success story for the CSIRO-Anatomics partnership which began in 2014.

The two parties produced the world’s first sternum and rib cage prosthetics for a cancer patient in Spain in 2015, and another for a British man who received the implant in 2016 after his sternum was removed following a rare disease. The 2016 implantation marked another world’s first of a composite 3D printed titanium and polyethylene polymer prosthesis.

“I’m proud of our work with Anatomics that has enabled patients around the world to lead normal lives,” said Dr. Keith McLean, Director of CSIRO Manufacturing.

“This particular partnership is indicative of how CSIRO aims to bring Australian research and innovation to bear for companies around the world, and demonstrates how CSIRO is also supporting companies’ acceleration as they enter U.S. markets,” said Susan Lucas-Conwell, Executive Vice President of CSIRO U.S.

“Partnerships like the one we have with Anatomics showcase the global advantage CSIRO can bring to our partners,” said Lucas-Conwell. “CSIRO opened an office here in the heart of Silicon Valley because we believe we have the technology, deep science expertise and resources to provide what global organiziations need to push the boundaries of what’s possible in their home markets and abroad.”
Anatomics Executive Chairman Dr. Paul D’Urso over the past 25 years there have been thousands of successful Anatomics’ implantations in patients in Europe, Australia and now the U.S.

“Anatomics’ advanced capabilities in personalized healthcare have opened new doors for patients in need of implants that are customized for them rather than having to use mass produced ‘off-the-shelf’ devices that don’t fit as well,” Dr. D’Urso said.