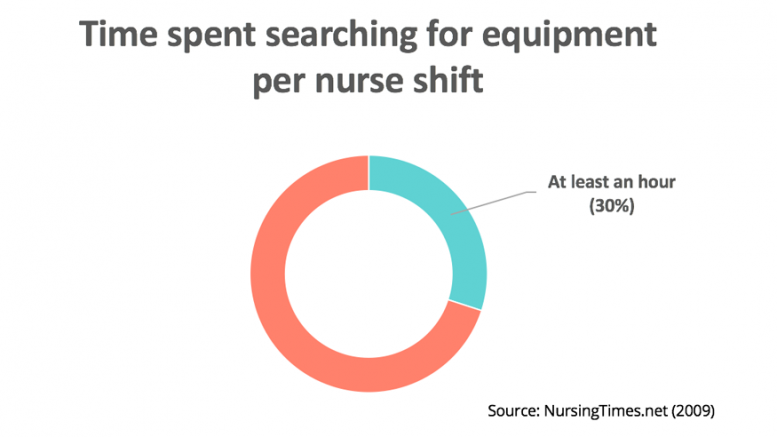 Nearly one in three nurses spends an hour per shift searching for equipment. That’s according to a survey by NursingTimes.net that polled 1000 nurses in 2009, and reflects approximately 6000 wasted hours each month for every 1000 nurses.

It’s unlikely those staggering statistics have changed much in the last six years since, particularly since the numbers of medical devices in hospitals continues to grow. A GE Healthcare study from 2012 showed the number of medical assets per hospital bed has increased from 8 to 13 in recent years.

In medical care, being able to locate equipment is paramount, particularly in emergency situations. But greater numbers of devices often mean greater difficulties in finding what’s needed when it’s needed. That leads to underutilization of critical equipment, the GE study found, with many hospitals reporting equipment utilization rates of less than 50%. That’s well below what’s considered the industry-acceptable use rate of 70% to 80%. What’s more, while hospitals know devices are underutilized, they continue overprovisioning in the hope that workers can find what they need nearby when they need it. All of these issues are leading to some compelling statistics. For instance, the numbers of devices per bed has led to an increase in the cost per bed by as much as 90% in recent years.

As more and more hospitals feel the pinch of staff resources whose time is wasted in searching for equipment, the value of finding a solution to the problem is more pronounced. That’s where indoor positioning systems (IPS) come in. Much like GPS for locating places and things outdoors, IPS performs the same functions indoors where satellite signals cannot reach.

IPS works with wall- or ceiling-mounted beacons that emit Bluetooth signals that are then picked up by devices such as smart phones or tablets to determine an accurate position within a space. Medical devices can be fitted with an asset tag so they can be accurately located via the IPS.

The GE study shows that 9 in 10 devices are movable, which can make them quite difficult to locate. By employing an IPS system, maintenance workers can quickly and easily determine the locations of equipment so they can perform timely routine maintenance and checks.

Additional benefits and uses of IPS with beacon technologies within medical buildings include the following:

According to a Fierce Health IT study from 2012, 10-15% of hospitals use real-time tracking, with a resulting 11% reduction in time spent searching for devices. As more and more medical facilities adopt IPS, time lost in searching for equipment and even staff will drop significantly, freeing up time for what really matters; providing the best possible care to patients.