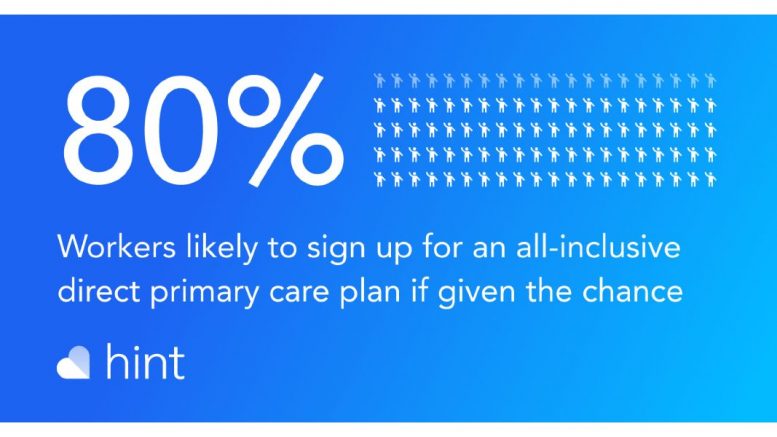 In a nationwide survey of consumers, the majority would be interested in joining a direct primary care (DPC) plan if offered through their employer. This is one of the key findings from a recent study conducted by Hint Health, the leading provider of membership management, billing, and employer direct contracting infrastructure for DPC and membership-based providers. While 68% of the 1,000 survey respondents were initially unfamiliar with the DPC model, once it was explained that the all-inclusive primary care program could lower costs, improve outcomes, and raise satisfaction, 83% of those surveyed expressed interest in signing up if DPC was provided through their current or future employer.

“The healthcare industry touts value-based care as a best practice, but it can be daunting to change from the old, outdated fee-for-service model,” said Zak Holdsworth, CEO and Co-Founder, Hint Health. “Direct primary care takes the guesswork out of the transition and provides an avenue for physicians and patients to have a better quality of life while focusing more on preventative care and catching health concerns before they become a major issue. It’s incredibly important that more physicians and employers consider adopting this model to protect consumers’ health and simultaneously shed the misaligned incentives and wasteful bureaucracy of the fee-for-service status quo.”

Direct primary care, another avenue to a value-based care system, is gaining traction among primary care practices and employers across the country, with members growing by more than 40% annually. The transparency, no third-party billing, and greater availability to serve patients are very attractive aspects for physicians. However, there’s greater need for patient/employee education to drive awareness of the benefits, which include same-day and next-day appointments, no co-pay, and telemedicine capabilities. Furthermore, the potential ROI for companies including this model is significant. In one instance, this advanced primary care model saved an employer 11% per employee per month, and in another scenario, an employer experienced annual savings of $913 per member compared to their existing PPO Choice plan, not including additional savings from improved recruitment and retention and lower absenteeism.

Initially released to attendees of Hint’s 5th annual Hint Summit, the first-of-its-kind data also show that respondents would be willing to contribute financially to employer-sponsored DPC plans. Specifically, 29% of respondents with a current or future employer indicated they would be willing to spend between $1-$20 per month, with another 32% agreeing to chip in between $20-$50 for the promise of better healthcare. Just 19% said they would not sign up for a membership if they had to pay anything.

Healthcare costs remained the concern in decision-making and the most important driver of satisfaction among consumers. The survey revealed that patients care both about the overall cost as well as transparency in understanding any hidden fees and surprise bills. When asked about what they’re currently most dissatisfied with in their current healthcare option, 63% of private healthcare respondents ranked the cost of care as their least favorable aspect.

For more information about the power of DPC, visit www.hint.com.